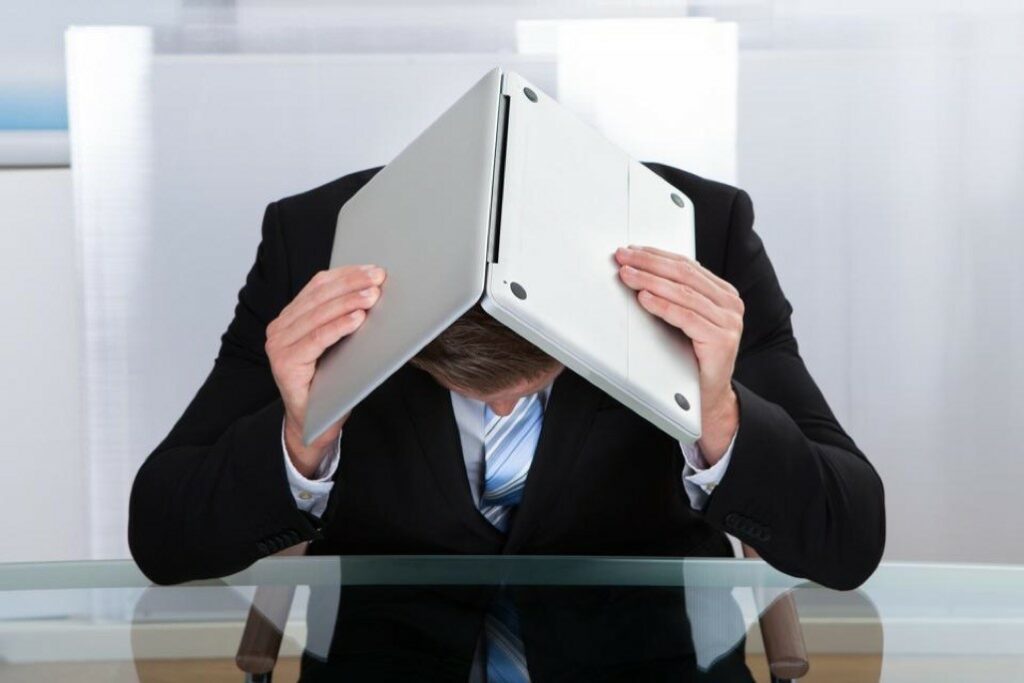 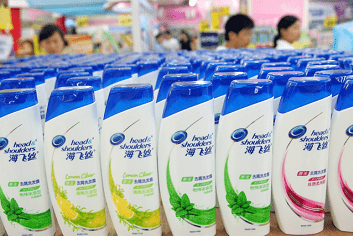 I was leading a small team of internal consultants, whose goal it was to improve the planning systems and procedures within P&G’s large Beauty & Grooming business.  I’d only started in the role when one of the manufacturing plants faced a massive crisis in the availability of raw materials needed to make its products.  The outcome?

Surging consumer demand could not be met and millions of dollars in sales were being lost every day, causing an immediate escalation of the problem to senior management.

While I was not responsible, as I was not running day to day operations, it did not take long until one senior leader blamed me and my team for the situation and asked me what my plan was “to fix it by the end of the week?”  The communications and events that followed triggered a toxic internal dialogue inside of me that eventually made me call in sick.

The downward spiral began as I inflicted punishing criticism and blame on myself for not “having seen this coming.”  I also blamed the aggressive Director for “pushing me far too hard … and being totally unfair” … expecting me to sort it all out by myself.

Still, I felt stupid for not having the right solutions at my fingertips to “rescue” the situation.  I began to load all the pressure, expectations, and responsibility onto my own shoulders, as I felt I should be the “rescuer.”  But I was in such a negative frame of mind, I could not see any way out.

With surprising speed, I moved from “self-persecutor” to “rescuer” to “victim.”  I was helpless, lost and stuck.  I felt I had neither sufficient knowledge nor the relationships to sort this out.  Hopeless and forlorn, I called in sick.

Years later, when looking back on this episode, I realized I was stuck in the drama triangle I mentioned above.   Developed by Stephen Karpman, the drama triangle maps out destructive interactions that can occur among people in conflict, but it also describes what goes on in our internal conflicts. 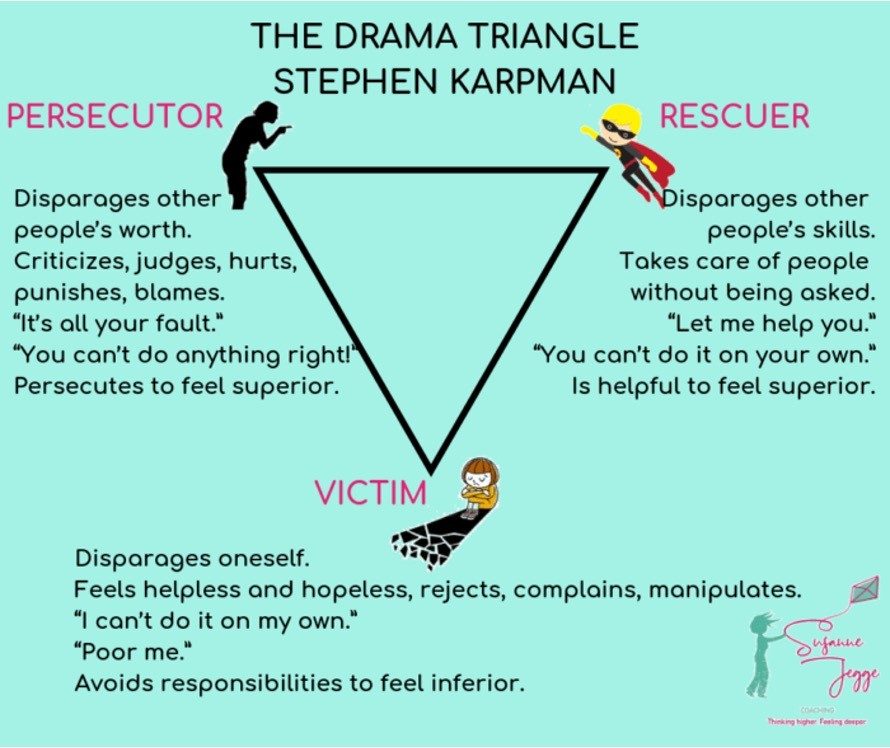 In hindsight, I realised I had played all three roles as events spun out of control.

So, what can we do to break this destructive downward spiral we all have likely experienced to one extent or another?

10 years ago, calling in sick helped me regain a much-needed sense of perspective.  Instead of going to the office, I hopped on my scooter and drove to the botanical garden where I observed old women doing their peaceful Tai Chi Morning routines.  I sat down and began to write out what had happened and how I felt.  Pouring the words out on paper helped me start to process what was going on, and it removed the pressure of feeling as if I had to fix it all by myself.  I shared what I had written with two trusted friends, and their encouragement and support gave me new hope and positive energy to look at the situation with fresh eyes. 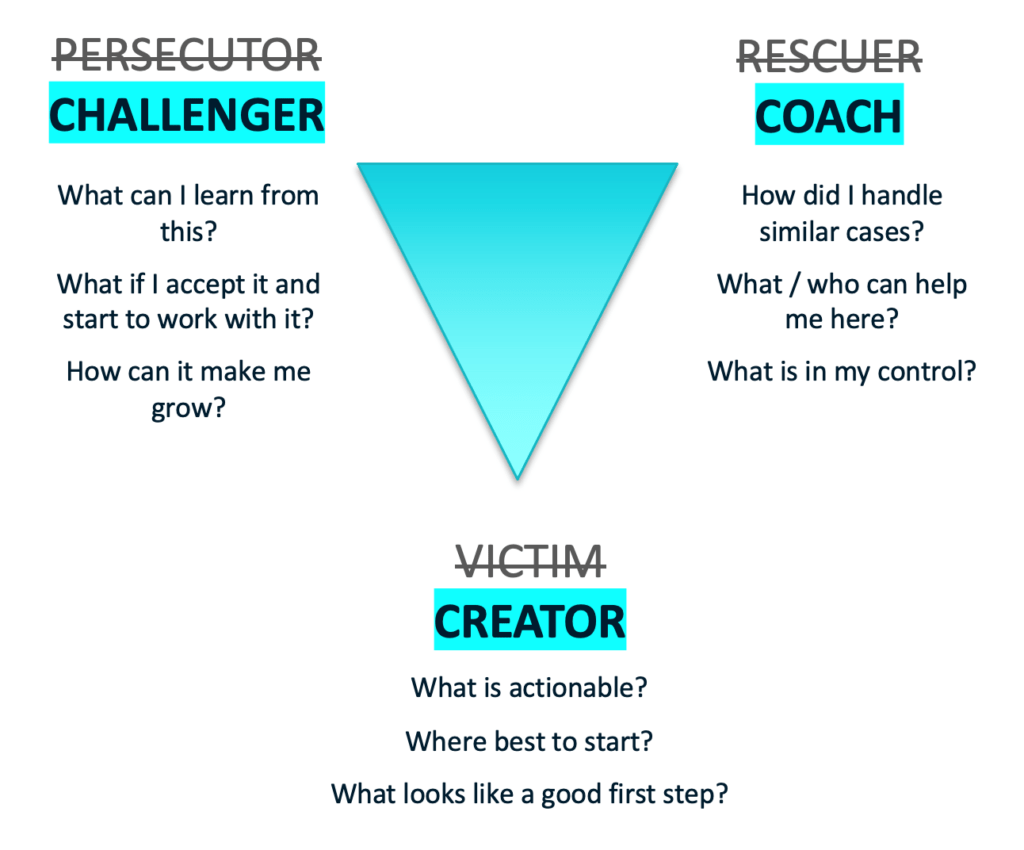 Slowly, step by step, I began to replace my internal “persecutor” with a “challenger.”   I asked myself, “What it is that I can learn in this situation?” and, “How will it make me grow?”  At the same time, I began to replace the “rescuer” with a “coach.”  I started to ask questions.  “What could the potential root causes be?” and, “How had I handled similar cases in the past?”  With this shift, the “victim” slowly gave way to the “creator,” who started to explore, “What small next steps I could take to unlock the situation?”

By the evening, I booked a flight to the manufacturing plant for the next day and invited two of my team members to join me.  We sat down for a full day, discussing the facts in constructive ways with the team at the plant.  By late afternoon, it was clear what had happened, and, by the end of the week, we presented our suggested resolution to management.  Resolution approved.  Problem resolved.  Case closed.

My challenge to you is whenever you are getting stuck in a conflict situation with other people or within yourself, check in and look at whether you are stuck in the drama triangle.

Take a step back, share the situation with a friend or trusted colleague, and begin to replace the persecutor with the challenger, the rescuer with the coach, and the victim with the creator.

That’s the key to seeing those challenging situations, however daunting they may seem, as wonderful opportunities for personal growth and professional development … and not the equivalent of personal and professional quicksand.