Chris Voss had been with the FBI’s Joint Terrorism Task Force for several years when he became intrigued by the idea of becoming a hostage negotiator.  To try his luck, he went to Amy Bonderow, who ran the FBI’s crisis negotiation team in New York at that time.

“I want to be a hostage negotiator,” Voss said.

Amy replied “Well, everyone does. Do you have any training, experience, credentials or a degree in Psychology/Sociology?”

Chris had none of it, but did not give up: “Come on, there must be something I can do?” 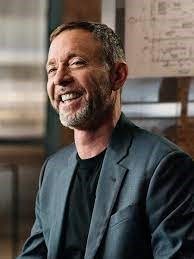 Amy’s reply was a big surprise: “Yes, volunteer at a suicide hotline.”

Voss was puzzled, but went to volunteer at HelpLine, founded by Norman Vincent Peale.  The basic rule there was to not give advice to the callers, but get them to a better place within maximum 20 minutes phone calls by “fully listening and being with them.”

After working at HelpLine for several weeks, Voss had his first performance review by his supervisor, Jim, who listened in to a call.

The call was from a cab driver, Daryl, who was afraid to go outside as he did not feel safe anymore. But, not working would lead to not paying the mortgage and the risk of losing his house and family.  Daryl was in deep despair.

Chris got to work and asked him: ”When was the last time someone tried to hurt you on the streets?”

“Well, I mean its been a long time” Daryl said.

“I can’t really remember a date Chris.  Maybe a year I guess”

“So, it’s safe to say that the outside world has not been too hard on you?”

The conversation from there flowed well and Chris even managed to make Daryl laugh a couple of times. By the end, Daryl could not give one more reason not to go outside and ended the call with “Thank you Chris for doing such a great job.”

Chris felt he had absolutely nailed it and went for his performance review.

“Jim, did you hear Daryl congratulate me? I talked him down, man. I killed it!”

Jim replied, “I don’t want to be harsh, but you were horrible! By the end of our calls, the callers should congratulate themselves and not YOU. THEY should have found a way forward which they really plan to act on. Daryl had none of this.”

Voss realised that the whole call had been about himself, his ego, his thinking, his solutions … and not about Daryl.  He had received a vague, “Yes, I suppose so,” but had not enabled Daryl to talk about what was really going emotionally with the likely result being, that Daryl would continue to feel not heard and be miserable.

Going through our busy daily lives and connecting with other people recently mainly online, when do we take the time to truly listen to the other?  Usually, we focus on the 7% conveyed in words, while we’re busy developing our own solutions and responses.  But how much do we really listen to the 38% that are communicated by tone of voice or the 55% via body language? 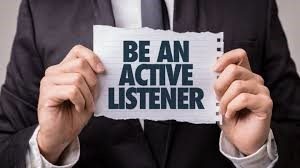 We all have this natural ability to mirror others, and when we truly listen, we get a chance to understand their inner emotional landscape in that moment. This creates the opportunity to move them into a more positive frame of mind as they feel heard and respected, which often leads to feeling more in control.

Meeting these basic human needs creates a positive mindset, which according to research can increase the productivity of our brains by whopping 31%.  Creating a more positive mindset provides the window to work constructively on solutions together.  That’s when you get a chance to influence.

So, the next time when your co-worker comes to you with a problem or your child tries to speak to you, resist the natural urge to immediately switch into “solution-gear.” Instead, listen for HOW they are saying things.  Hear from the sound what is really going on, and then make use of the golden ingredients of active listening:

Observe how they begin to open-up as they feel heard, respected and more in control.

5 months after volunteering at HelpLine Chris Voss, came back to Amy and told her what he’d learned.  She was impressed.  He got into the FBI’s negotiator program and eventually became the FBI’s chief international hostage and kidnapping negotiator.  In his book, Never Split The Difference!, he explains how active listening has revolutionized the FBI’s hostage negotiation approach, helping him and his colleagues successfully resolve numerous hostage cases.

If it works in crisis situations and for kidnappers, why would it not work for the people we are interacting with in our daily lives and especially those closest to us?

Try it out.  Maybe we have two ears and one mouth for a reason?