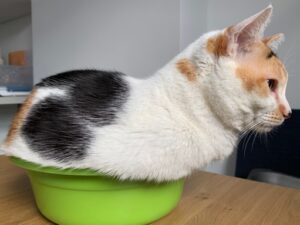 Standing on a pebble-strewn path, the loan-shark bent over and picked up two pebbles.

The daughter was perplexed and nervous. The situation seemed hopeless, as she quickly contemplated her choices:
1. I could refuse to pick a pebble from the bag, but this would not resolve my father’s loan situation.
2. I could take both pebbles out of the bag and expose the loan-shark for cheating, but this might make things even worse..
3. Or … I could just go along, pick a pebble from the bag, knowing it was black, and sacrifice myself for my father’s freedom.
Have you, dear reader, ever been in a situation like that of the daughter, where every possible obvious option was unacceptable … where there was literally no way out “alive,” almost as if someone had a gun to your head?

How do you react in such situations? Do you panic? Do you try to run? Do you freeze? Do you give up?

Here is what the daughter did:
“Please give me a moment to gather my nerves as this will be the most important choice I may ever have to make.”
With that, she took a stroll through the garden. Her mind was racing, but she managed to take some deep breaths and regain her composure. “There must be another solution”, she thought. She refused to give up. Looking at the pebble strewn garden path, she experienced a flash of genius.
She went back to the loan shark and drew a pebble from the bag. But, before looking at it, she dropped it “accidentally” into the midst of all the other pebbles on the ground.
She said to the loan-shark: “Oh, how clumsy of me. Never mind, if you look into the bag for the one that is left, you will be able to tell which pebble I picked.”
The loan shark had been outsmarted. The pebble left in the bag was black. He didn’t want to be exposed for cheating, so he was forced to play along, pretend as if the pebble the daughter dropped was white, and clear her father’s debt.
Here is my challenge to you at the beginning of this new year. Whenever you face a seemingly hopeless situation, remind yourself of the two black pebbles and the brave daughter.

Take a breather. Go for a walk on a pebble-strewn path. Sleep. Go to the gym. Talk with a friend. Do whatever it takes to move beyond the hopeless thoughts and allow your wonderful mind conjure up new and creative solutions.

I think you will discover the ways out of intractable situations are far more plentiful than we can possibly imagine at first glance.

All you need to do is focus on possibilities, rather than your seemingly hopeless situation, and give the creative genius within you a chance to light the way forward.